My bed senses me

My bed has -- with varying degrees of success -- kept track of my sleep during the last few months using the Beddit Pro tracker. I got to borrow this from a friend who works for Beddit while waiting for the Indiegogo edition Beddit sensor to arrive. Now it has. 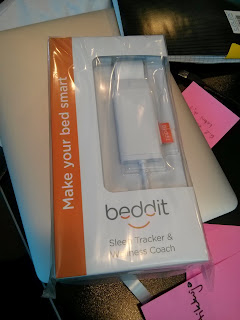 The beddit sensor technology is pretty fascinating. Basically, the sensor band registers tiny variations in pressure and with a lot of clever signal processing, can deduce my breathing, heartbeat and movements from it. What's really fascinating is that the same sensor technology could be put under a leg of a comfy chair and was able to pick up my heartbeat and breathing through the layers of chair and comf. I was impressed. What's really really fascinating is that in a demo, the sensor could pick up the heartbeat from a driver sitting in a van with the engine on. I haven't seen this demo but it's supposedly there on Youtube.

The Beddit Pro is a small embedded computer with one or two "ballistocardic" sensors. You connect one side to your LAN with wired or wireless Ethernet and put the sensors under the sheets of your bed. And then you sleep (or do whatever you do in your bed). I admit that the first night or two, i was very conscious of the sensor but that faded quickly.

The results of the Pro are more or less credible. For my wife, they were pretty much off the charts, as she goes into a bit of a coma when reading in bed -- or at least that's what the Beddit thinks. The most confusing bit is that the system reports i got around one hour of deep sleep, and i really have no idea if that's a good thing or a bad one. The results themselves are viewable on Beddit's web site and you can add comments to your sleep diary if you want.

The web site is a bit clunky to use, but the new Beddit tracker runs uses your mobile device (phone, tablet, Android or IOS thingy...) as proxy to the Beddit mainframe. As the results will be in an app instead than on a web site, my hopes are that this'll be easier to use.

Finally, what i'm really hoping for is proper integration with other trackers out there. My hopes is that i can plug all sorts of biometrics into Human API and spin and mash my data from there. We'll have to see.

Tonight i'll connect the new sleep tracker and in a week from now, i should have something new to report.

PS: This would have been a typical post to my normal blog, but as it's down (see previous post) you'll see it here.